A middle schooler from Monroe County was named the 2012 Mike Weaver Award winner on Saturday in a ceremony at Vine Ingle Little League.

Drew Edge, 12, who is headed into the 8th grade at Bank Stephens Middle School, was selected from 9 finalists to be the award winner this year. He is the son of Heidi and Scott Edge of Monroe County. In the photo above, from left: Christian Thompson, Chrystle Edge, Drew Edge, Heidi Edge and Scott Edge. (Christian and Chrystle are engaged to be married.)

Drew is a member of the Yankees and wears jersey number 10. He is the ninth winner of the Mike Weaver Award.

Bill Adams, who supervises the selection process at Vine Ingle, introduced the Weavers, and his son Stephen — who was a good friend of Mike’s — presented Drew Edge with his hat, which bears the same *V* symbol that has come to represent the Mike Weaver Award.

As winner of the award, Drew and three of his family members or friends receive tickets to an Atlanta Braves home game. The group also receives a night’s stay at a hotel, a tour of Turner Field, a meal at the 755 Club at the stadium and tickets to Six Flags Over Georgia, plus a commemorative plaque and cash for souvenirs.

Some of Mike’s good friends were present for the award today, including Stephen Adams, Adam Dukes, Rachel Phillips and Chandler Penn. Also, Will Argo was present from the Bon Hommes organization, which sponsors a fund-raising golf tournament that helps support the costs of the award, as well as the Mike Weaver Foundation. 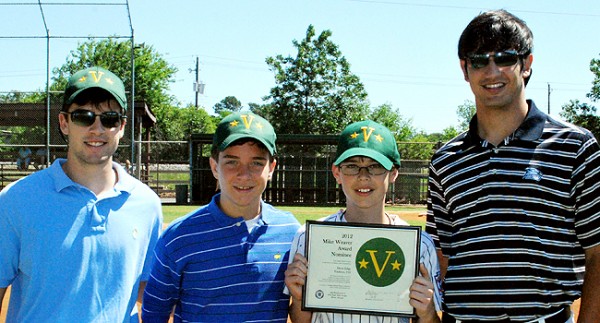 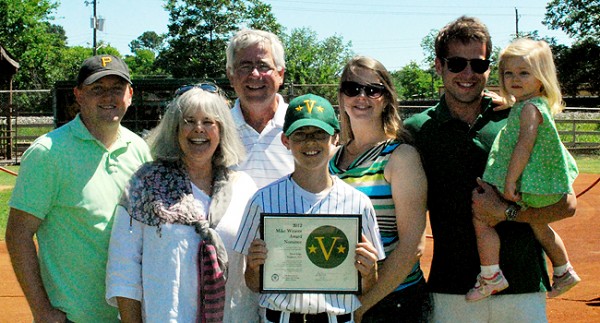