Chandler poses with his parents, Pam and John Lord, after the ceremony was held at Vine Ingle Little League.

Chandler Lord, the son of Pam and John Lord of Macon, was named on Monday, June 6, 2009, as the recipient of the 2009 Mike Weaver Award at Vine Ingle Little League.

He was selected from 10 nominees, who were picked by parents from their team; the final selection was made by umpires in the league. This was the sixth year of the Mike Weaver Award, and four of the previous award winners were present for the ceremony.

Chandler was a member of the Dodgers. The other nominees for the 2009 award were Joseph Slappey of the Giants, Marshall Lyles of the Astros, Charlie Holmes of the Royals, Jackson Burgess of the Orioles, Jabin Smith of the Pirates, Spencer Williams of the A’s, Kyle Brooks of Reds, Danny Adams of the Yankees, Regan Green of the Red Sox.

The award recipients are honored for their good character, sportsmanship and pure love of the game of baseball. Each nominee received a certificate and $30 gift card. As the award winner, Chandler received tickets to a tour of Turner Stadium, four tickets to an Atlanta Braves baseball game, hotel accommodations, four tickets to Six Flags over Georgia, money for meals and souvenirs and the plaque he’s displaying in the photo. Chandler has plans to attend the Atlanta Braves game vs. the New York Mets on July 16.

At the ceremony, held in front of the pitcher’s mound on the Major League field at Vine Ingle, Chandler also received a green hat with gold lettering, just like the one that Mike Weaver wore for many years. Once again this year the hat also was worn by the umpires in the league as a tribute to Mike. The side of Chandler’s hat was embroidered with the year and name of the award.

Bill Weaver, Mike’s father, thanked Bill Adams, Jimmy Braswell and league president Ed Muse for their support of the award. He also thanked Stephen Adams, Adam Dukes and Rachel Phillips for their efforts to organize fund-raising events, including Weaver’s Weekend last fall, and also a recent golf tournament. Weaver also extended thanks to Terry Smith of AT&T and Rosie Bailey of the Holiday Inn Conference Center in Atlanta for their corporate support of the award program.

Following the announcement of the award, Bill Weaver read from a letter the family gives to the award recipient. The letter concludes: “Since Mike had so many wonderful memories of Vine Ingle, we thought it would be appropriate to give a boy his own special memory, compliments of people who liked Mike. We hope we’re giving you such a memory, but more importantly we want to honor you for being the kind of friend that your teammates and friends look up to. May you build upon, and never lose, the wonderful traits you’ve been honored for here today.”

Then Weaver asked Chandler, “Will you try to do that?” And Chandler responded, “Yes, sir.”

The *V* symbol has come to represent the memory of Mike, who was known by his friends for wearing the green cap just like the ones presented to the award winners. That was the cap he received for being a member of the Vine Ingle tournament team as a 12-year-old. He continued to wear that hat throughout high school and into college, and standing 6-feet-2-inches tall, he was easily spotted in any crowd as being the only one with a green hat. Following his death, several of Mike’s friends created stickers of this symbol, representing the design of the front of Mike’s green hat. The friends sold the stickers for $5 each, donating the proceeds above their cost for the Vine Ingle award in Mike’s memory. The stickers have been placed on many cars belonging to Mike’s friends and family. 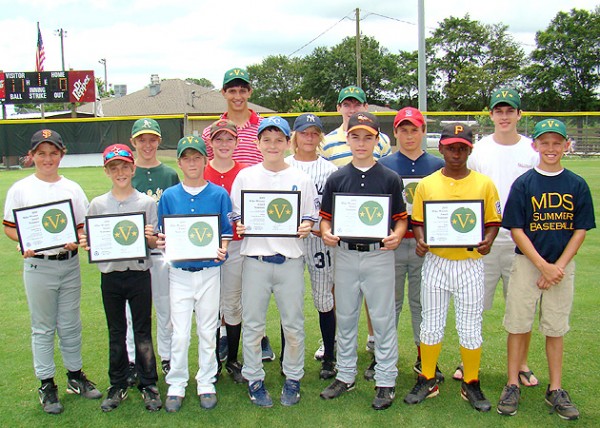 This photo includes all 10 of the 2009 nominees, as well as four of the five previous winners of the Mike Weaver Award. Front row, left to right, nominees Joseph Slappey of the Giants, Marshall Lyles of the Astros, Chandler Lord of the Dodgers, Charlie Holmes of the Royals, Jackson Burgess of the Orioles, Jabin Smith of the Pirates and 2008 award winner Adam Barth. Second row, nominees Spencer Williams of the A’s, Kyle Brooks of Reds, Danny Adams of the Yankees, Regan Green of the Red Sox, and 2006 award winner Brannon Hicks. Back row, 2005 award recipient Matthew Maier and 2007 award winner Greer Smith. 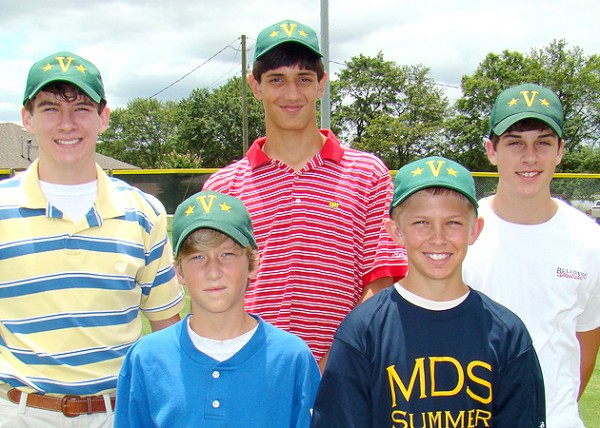 Five of the six winners of the Mike Weaver Award are, from left, 2007 winner Greer Smith, 2009 winner Chandler Lord, 2005 winner Matthew Maier, 2008 winner Adam Barth and 2006 winner Brannon Hicks. The first winner of the award, Spencer Maxwell, could not attend the ceremony as he was out of town. 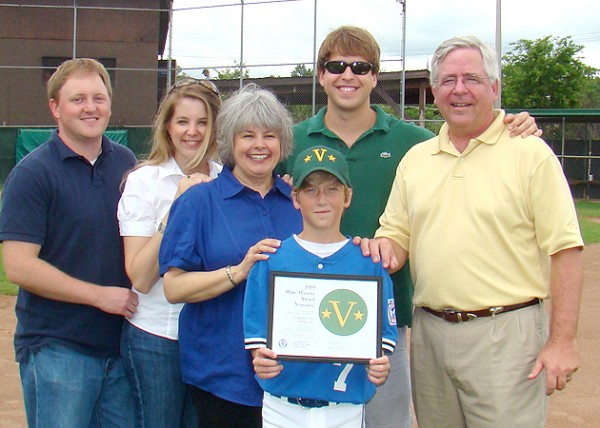