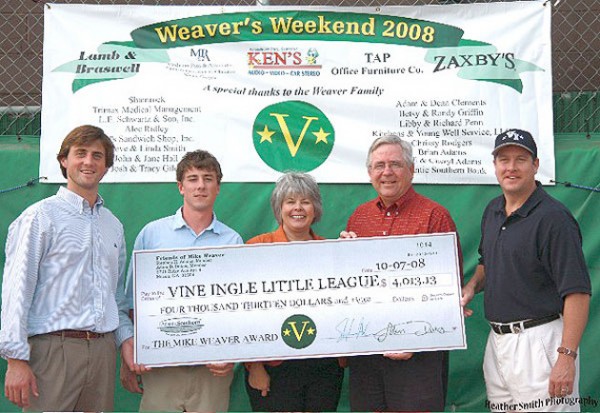 Proceeds from the 1st Annual Weaver’s Weekend were presented in October 2008 in a ceremony at Vine-Ingle Little League. A total of $4,013.13 (Mike’s uniform number was always #13) was contributed to the Mike Weaver Award fund, which pays for the award that is given to a player at the end of each spring season. A portion of the money also came by way of a gift from Tiffany Mallory, a classmate of Mike’s at Central High School, who donated the money that was given to her at a law school graduation ceremony. Present for this ceremony were, from left, Adam Dukes, Stephen Adams, Erin and Bill Weaver, and Vine-Ingle President Ed Muse. | Heather Smith Photography